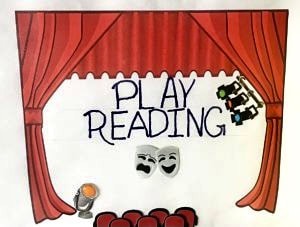 Coordinator:  Helen Woodcock
Where:  Members' Houses
​When::  1st Thursday of each month at 2:00 p.m.
INTRODUCTION
We are a friendly group who read an eclectic mix of plays.  Serious, thought provoking, funny and murder mystery scripts have entertained us and improved our play reading skills.

Members choose, and are in charge of, the casting of their plays.  We take turns to host in our own homes if that is practicable. We have watched professional productions at the Alex in Birmingham and the Bear Pit Theatre in Stratford upon Avon.

The group meet on the first Thursday of the month at 2:00 pm and we always leave feeling we have had an afternoon well spent.  An interlude provides us with tea or coffee and a chat, which is usually about the play.

The idea is that we enjoy being thespians without having to act on stage!!
​
SEEKING NEW MEMBERS
​We have lost a few members over the past year and would welcome new readers.  If you are interested please e-mail Helen Woodcock or phone on 01564702259, and she will be pleased and able to tell you more.
​
FORTHCOMING PLAYS
Thursday 9 June 2022
Separate Tables by Terence Rattigan

Separate Tables was probably Rattigan’s finest work and demonstrates his art of characterisation.  It consists of two plays set in the dining room and lounge of a private genteel hotel in Bournemouth, in which the residents are obliged to take meals at individual tables, symbolising the isolation of the individuals.  All characters apart from 3 transients live permanently at the hotel.

In Table No. 1, a down-at-heels journalist is confronted by his ex-wife, a former model who provoked him to a violent act that sent him to prison and ruined him.   Still loving each other, they nevertheless go through another terrible scene and it is the hotel manager, Miss Cooper, who finds a way to repair their broken lives.
​
In Table No. 2, a bogus army Major without the background and education he claims and a neurotic girl with a ruthless domineering mother are attracted to each other.  A sordid scandal threatens to drive them apart, but when all seems lost Miss Cooper comes to the rescue.

​Murdered to Death is the first in the ‘Inspector Pratt’ trilogy of spoofs of the Agatha Christie ‘whodunnit’ genre, with a dash of Inspector Clousseau thrown in for good measure.  The play, set in the 1930’s takes place in an English Manor, slightly worse for wear, with worn out decor and furnishings.  It introduces the inept and bungling Inspector Pratt, who battles against the odds and his own incompetence to solve the murder of the house’s owner.  It soon becomes clear that the murderer isn’t finished yet; will the miscreant be unmasked before everyone else has met their doom, or will the audience die laughing?​

​Four into three won’t go; except, in Ayckbourn’s 1977 play, it miraculously does.  A pair of roving neurotics hawk their problems around the bedrooms of three other couples; and what emerged is Ayckbourn’s hilariously bleak view of middle-class marriage.

Trevor and Susannah, whose marriage is on the rocks, inflict their miseries on their nearest and dearest: three couples whose own relationships are tenuous at best.  Taking place sequentially in the three beleaguered couples’ bedrooms during one endless Saturday night of co-dependence and dysfunction, beds, tempers and domestic order are ruffled, leading all the players to a hilariously touching epiphany.

​ Bedroom Farce is one of Ayckbourn’s funniest plays.